Lost City of the Incas (Paperback) 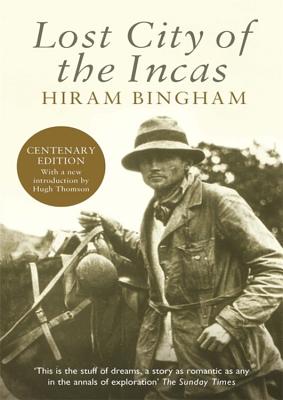 First published in the 1950s, this is a classic account of the discovery in 1911 of the lost city of Machu Picchu.

In 1911 Hiram Bingham, a pre-historian with a love of exotic destinations, set out to Peru in search of the legendary city of Vilcabamba, capital city of the last Inca ruler, Manco Inca. With a combination of doggedness and good fortune he stumbled on the perfectly preserved ruins of Machu Picchu perched on a cloud-capped ledge 2000 feet above the torrent of the Urubamba River. The buildings were of white granite, exquisitely carved blocks each higher than a man. Bingham had not, as it turned out, found Vilcabamba, but he had nevertheless made an astonishing and memorable discovery, which he describes in his bestselling book LOST CITY OF THE INCAS.

Hiram Bingham was born in Hawaii in 1875 and educated at Yale. His early expeditions to South America and his discovery of Machu Picchu were just the start of a long and colourful career: he went on to command air force troops in France during the First World War and to become a Senator. He died in 1956. Hugh Thomson, the editor of this edition, is an explorer, travel writer and documentary filmmaker living in Bristol.

Hugh Thomson, the editor of this edition, is a travel writer and documentary film maker living in Bristol. His first book, The White Rock, is published by W&N in July 2001.

A rich, lively book ... it is the classic adventure—IRISH TIMES

Bingham catalogues his finds with admirable concision, and indulges his wide interests, revealing little-known facts about the Incas... He captures the majesty of the architecture in its dramatic and wild surroundings—LITERARY REVIEW

This is the stuff of dreams, a story as romantic as any in the annals of exploration—SUNDAY TIMES