The More You Watch the Less You Know: News Wars/(sub)Merged Hopes/Media Adventures (Hardcover) 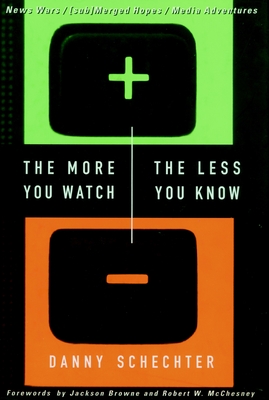 By Danny Schechter, Jackson Browne (Foreword by), Robert McChesney (Foreword by)
$26.95
Backordered or Out of Print

Formerly a Nieman Fellow in Journalism at Harvard, DANNY SCHECHTER made waves in the mainstream and alternative media for more than 30 years. Called the "alternative Walter Cronkite," he witnessed and participated in the history-making events of our age, from the founding of the Yippies in 1967, to Nelson Mandela's triumphant presidential election in 1994, for which Schechter was designated the exclusive filmmaker, to the Media and Democracy Congress of 1996, which he helped organize, to his most recent television production, Rights & Wrongs, which aired weekly on over 150 PBS and cable outlets nationwide. His many TV specials and films include Beyond Life: Timothy Leary Lives (1997), Countdown to Freedom: Ten Days that Changed South Africa (1994), narrated by James Earl Jones and Alfre Woodard, Sarajevo Ground Zero (1993), Mandela in America (1990), and The Making of Sun City (1990). For eight years a producer at ABC's 20/20, where he won two National News Emmys, Schechter reported from 45 countries and lectured at many schools and universities. He was co-founder and executive producer at Globalvision, a New York-based television and film company where he produced the award-winning series South Africa Now and co-produced Right & Wrongs: Human Rights Television with Charlayne Hunter-Gault. Schechter passed away in 2015.


“As 'news dissector' on Boston radio, Danny Schechter literally educated a generation. . . . He went on to become what he describes as a 'mole in the media machine.' His account of his struggles, and considerable achievements, should enlighten [and] inspire.” –Noam Chomsky


“Schechter has a keen sense of what is happening in network news.” –USA Today