The Life and Times of the Legendary Larry Townsend (Paperback) 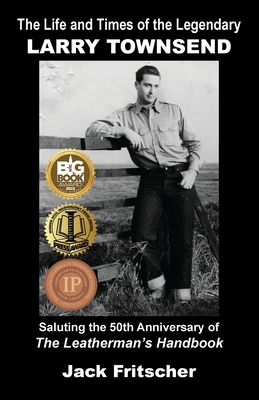 A lively memoir of West Hollywood author-activist-influencer Larry Townsend whose signature Leatherman's Handbook was a founding text for gay men worldwide in the 20th century. Celebrating Townsend's 90th birthday and the 50th anniversary of his Handbook, this homage to Townsend written by his close friend of 40 years is vivid as a screenplay. Like a biographical film comedy sauced with honest realism, it stars the best-selling author of nearly 80 books who, long before the glitter bomb of Stonewall, helped found the new world of gay publishing, politics, and popular culture.

The propulsive text, based on the testimony of intimate friends, especially his "Leather Wife" Jeanne Barney, reveals the rise and fall of the private man in all his unvarnished glory struggling behind his public persona even as he fights for the rights of other independent authors, and ends his life in a huge scandal of self-defense, suing floundering gay bookstores to protect his copyrights.

The illustrated memoir offers readers unfamiliar with Townsend's leather milieu a charming and intimate profile of the author as a psychologist, author, and healing mentor whose Handbook was such a years-long bestseller that he literally educated American and international gay popular culture about the nature of leather people, principles, and practice. In Europe in 1977, Der Spiegel reported that in the world scene of leathermen, "The Leatherman's Handbook by a certain Larry Townsend is considered their Bible." He was an entertaining teacher who was not didactic, prescriptive, or old guard. His writing was a declaration of gay diversity. He challenged politically-correct mainstream censors condemning as pornography the consensual sadomasochism he championed as a kind of empowering analgesic ritual for men trying to cope counterphobically with PTSD caused by exposure to lifelong homophobia.

This memoir unwrapping gay history spotlights the operatic Townsend, founding president of the Hollywood Hills Democratic Club, through revealing quotes from his own writing. It breaks down the barriers between so-called "low" and "high" culture and focuses on filling in the gaps that a neglect of gay popular culture by the politically-correct gay establishment has made in our understanding of the workings of broadband gay society.

What Townsend wrote in 1972 describing his own Handbook applies to Fritscher's 2021 handbook about Townsend: "...a definitive exploration of the gay S&M leather scene...written by a qualified writer who has observed it all from the inside." Jack Fritscher, PhD, qualified as a founding member of the American Popular Culture Association in 1968, is the 1970s editor-in-chief of Drummer who invited Townsend to write for that magazine for twelve years. Fritscher, who stayed true to his friend to the scandalous end, is the perfect eyewitness in this candid documentary memoir of gay history. A fascinating, witty, and wise story of leather lives well lived from the 1950s to 2008.