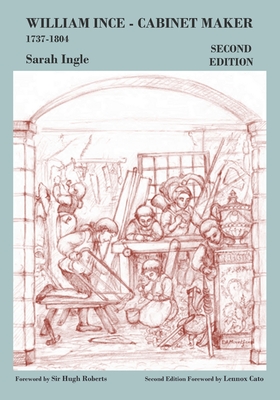 By Sarah Ingle, Derry Mountford (Illustrator), Jennifer Evans (Illustrator)
$23.00
NOT ON OUR SHELVES- available for order, usually ships in 1-5 days

A detailed family history of William Ince and the life of John Mayhew, partners in the important 18th century cabinet making firm Ince & Mayhew. Their antique furniture is on display in a number of museums and stately homes around the world. The postscript describes the intriguing adventures of William's son in 1830s Virginia. 'A fascinating and painstakingly researched study' Sir Hugh Roberts. 'An absolutely fascinating book providing the reader with a real sense of how life was lived during that great period of English furniture making.' Lennox Cato, Antiques Roadshow Furniture Specialist

The detailed history of the firm Ince & Mayhew starts with their furniture directory The Universal System of Household Furniture and goes through to the winding up of the long-running Chancery case that ended their partnership. The lives of both William Ince and John Mayhew convey the riches that could be enjoyed by the combination of talent and entrepreneurship, but also the hardship that had to be endured in the conditions of their time.

A brief look at their descendants touches on diverse topics, including:

The second editon is about twice the size of the original with a greater emphasis on celebrating the work of William Ince. It also includes new information on his father and sisters in Worcestershire, his wife's family in London and the intriguing adventures of William's son Frederick in America linked to the struggles of his long-suffering wife Martha de Bar in England, taken from Frederick's papers written between 1824 and 1836.

There is a chapter on John Mayhew and his family, including new research on John's baptism and his siblings, and information about his children and grandchildren. There is also information on some of William's more notable descendants, including the colourful actress Annette Ince, who played Juliet to John Wilkes Booth's Romeo and the artists Joseph Murray Ince, Charles Percy Ince and Charlotte Grace Cowell.

The book has over a hundred illustrations with drawings and water-colours, as well as photographs, maps and diagrams, more than half in colour.

This book is a must for anyone wanting to know more about the life of one of the most important cabinet makers in England in the 18th century whose name has every right to be as celebrated as that of Chippendale.