The Spare and the Heir: Calder (Lords of Time #5) (Paperback) 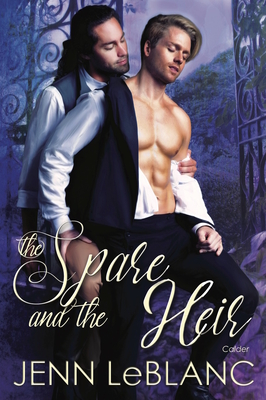 This is book number 5 in the Lords of Time series.

Thorne Magnus Calder, heir to the Duke of St. Cyr, has been betrayed by his own heart. Watching the man he loves court the lovely Lady Alain was a pain so visceral he quit London for India. All Calder wanted was to put some distance between them and investigate the machinations of a group intent on establishing a skin trade in the heart of London. He didn't expect to be taken captive by a ghost. Lord Quintin Wyntor's heart has always belonged to Calder but a relationship with another man is a crime neither is willing to face and recent scrutiny only complicates their relationship. The strain drives a wedge between them--the physical manifestation of which effects his everyday life. As a man of honor, Quinn marries the very woman who drove that last wedge between he and Calder in order to save her. He never anticipated she would hand him the key to his own freedom. But when Calder receives word that Quinn and Celeste are married...It's a vow Calder refuses to break. Lady Alain forces Quinn to accept that his love for Calder cannot be denied and Quinn realizes that the risks they'll face together may not be as dangerous as their desolation as they attempt to survive apart. As Quinn chases Calder to India one thing is certain--Quinn will not return to England without the man he loves. If they can conquer their differences, together their little triumvirate may be given the grace to survive. - This book is the story of Calder and Quinn and has their happily ever after with Celeste. The prequel is The Trouble With Grace--which has important elements of Calder and Quinn's story as well as Celeste's primary romance and HFN. This book is a gay romance and also contains important pieces of an autochorissexual romance (on the asexual spectrum). Both are explicit. Warning: this is not just a kissing book, it is so much more. Warning: You're going to fall in love, and it's going to hurt. The Spare and The Heir is the fifth full-length historical romance in the Lords of Time series. The other books in the Lords of Time series are: AVAILABLE BOOKS IN THE LORDS OF TIME SERIES:
THE RAKE AND THE RECLUSE: Book One in the Lords of Time Series
THE DUKE AND THE BARON: Book Two in the Lords of Time Series
THE DUKE AND THE DOMINA: Book Three in the Lords of Time Series
THE TROUBLE WITH GRACE: Book Four in the Lords of Time Series
THE SPARE AND THE HEIR: Book Five in the Lords of Time Series COMING SOON:
GRAY: Book Six in the Lords of Time Series
MADOC: Book Seven in the Lords of Time Series
LOUISA: A companion NOVEL in the Lords of Time Series