I See You So Close: The Last Ghost Series, Book Two (Hardcover) 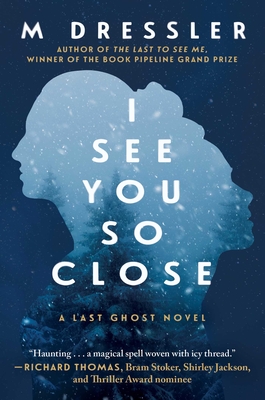 This is book number 2 in the The Last Ghost Series series.

The dead and their secrets refuse to stay buried in this thrilling sequel to M. Dressler’s award-winning The Last to See Me, for fans of Lauren Oliver and Kazuo Ishiguro

Emma Rose Finnis has never made peace with her death . . . or with her ghostly afterlife. Finally free from the mansion she haunted for more than a hundred years, she takes on a new, daring form, one that allows her to pass for living among the citizens of the remote Sierra Nevada town of White Bar. But the town is hiding its own deadly truth, buried in its Gold Rush past. As the sleepy town’s secrets come to life, they inevitably bring Emma Rose’s past back to haunt her.

In this second book in M Dressler's Last Ghost Series, Emma Rose must unlock the secrets of the living, the dead, and even of time itself, if she hopes to be more than an endless fugitive and outlast the ghost hunter who relentlessly stalks her.

M Dressler is the author of six novels, including The Last to See Me, book one in The Last Ghost Series, grand prize winner of the Book Pipeline Award and winner of Audiofile Magazine's Earphone Award for Fiction. Her stories and essays have appeared in the Kenyon Review, Creative Nonfiction, and Lit Hub, among others. Her honors include the North Carolina Artists Fellowship and the Paisano Fellowship in Literature, as well as residencies and fellowships from the Fulbright Commission, Hedgebrook, and the Carson McCullers Center. She is an emerita professor at Guilford College in North Carolina and lives and writes on the Oregon coast and in the high desert of southern Utah, birthplace of the ghosts in Our Eyes at Night.

"Dressler’s latest is a captivating page-turner about what defines and divides a community, both in life and in death."—​Booklist

“A haunting story filled with longing and loss, I See You So Close is a magical spell woven with icy thread and the fabric of lives torn apart. Dressler is a powerful voice—hypnotic at times, speaking eternal truths while conjuring darkness, with a dash of hope tossed in for good measure.”—Richard Thomas, Bram Stoker, Shirley Jackson, and Thriller Award nominee

"A powerful tale of the supernatural, full of suspense and long-hidden secrets. I loved it.”—W C Ryan, award-winning author of A House of Ghosts

"The dark mystery of a gold rush town, its restless ghosts, and its secret-keeping citizens will keep you turning pages. But it’s Dressler’s profound insights into loneliness and desire that will truly haunt you."—Dawn Raffel, author of The Strange Case of Dr. Couney

"[A] spiritual homage to the Victorian-era Christmas ghost story tradition . . . perfect for the winter doldrums, due to both the timing of the narrative and Dressler’s ongoing ability to weave emotionally compelling stories . . . [Her] aptitude for writing at the intersection of conflict and compassion continue to shine. . . . [A] series that will continue to haunt the reader for many long years."—Sublime Horror

“In this highly atmospheric and beautifully crafted novel, the movements of the ghost Emma Rose are both palpable and fascinating. This latest from Dressler is spellbinding from page one.”—Library Journal, starred review

“Evocative . . . astonishing . . . at once lyrical, and ruthlessly human.”—Horror Reviews

“A gorgeous mystery of love that twists into curses.”—Kirkus

“Dressler . . . possesses a sublime talent for supernatural fiction—The Last to See Me being her first foray into the genre. Like Alice Lambry’s sea-glass, glimmering and reflecting the light of the golden sun, Dressler’s attention to detail helps capture the ethereal in a flash.”—Sublime Horror

“In this enjoyably claustrophobic novel set almost completely within Lambry House, Dressler reaches beyond the grave to consider the lengths that people go to in order to leave their mark behind.”——Publishers Weekly

“A book that will leave you breathless.”—Milwaukee Journal Sentinel

“For those who need a good scare.”—Telegraph Herald

“Dressler knows how to make worms and flowers seem positively, dreadfully frightening, a talent readers will come to adore.”—Bluffton Today

“Dressler does weave what could be her own version of how love can undo you. How it can become this thing that blinds, that quite literally becomes your ruin, the ghost is ultimately the haunted until set free. The imperfect metaphor for love’s much darker side.”—Chippewa Herald

“This poem of a novel, exquisitely written, introduced me to the inner life of a ghost and held me spellbound throughout. . . . I heard whisperings from the attic, from under the bed. M Dressler has written an extraordinary book, poignant and tragic.”—Luanne Rice, New York Times bestselling author of The Beautiful Lost

“M Dressler has created an original world between time and place, but the longings of her characters are very real. She paints exquisite images with her words, each paragraph a revelation. Don’t miss this unusual and wonderful novel.”—Carolyn Haines, USA Today bestselling author of the Sarah Booth Delaney mystery series

“Marvelously written . . . A book about how the present and past live in constant tension, how past tragedies still influence our lives today.”—Jeff Abbott, New York Times bestselling author of Blame

“The Last to See Me is a riveting supernatural duel that reveals itself one measured and lyrical gut punch at a time. A compelling and beautifully written page-turner.”—Scott Hawkins, author of The Library at Mount Char

“Readers will be ensnared and entranced by this story.”—Wendy Webb, bestselling author of The Fate of Mercy Alban

“A new way to think about place, alienation, and the yearnings that make ghosts of us all. This is a writer working at the height of her powers.”—W. Scott Poole, Bram Stoker Award nominee and author of In the Mountains of Madness: The Life and Extraordinary Afterlife of H. P. Lovecraft

“Dressler weaves a suspenseful ghost story that explores love in many dimensions—both spiritual and of the human heart.”—April Smith, author of Home Sweet Home

“Completely captivating, The Last to See Me is the most original take on the ghost story since The Others.”—Lauren A. Forry, author of Abigale Hall

“The Last to See Me is the most original ghost story I've read in years. It's both a thrilling tale and a bold condemnation of moral tyranny—a tyranny that fires the spirit of a brave, vulnerable young woman even after death. I couldn't stop reading until I turned the last shocking page. Exquisite and terrifying.”—Laura Benedict, Edgar-nominated author of the Bliss House novels

“Love, longing, fear, hope—the common threads of mortal experience weave themselves through Dressler's exquisite story of an ordinary life that reaches extraordinary proportions. The Last to See Me is a ghost story that's deeply human, rich with wonder at all that makes even the most invisible life profound.”—Margo Catts, author of Among the Lesser Gods

"Captures both heartbreak and hope, wrapped in careful language that is crystalline in its clarity." —The Denver Post

"Dressler signals that she sets out to write, not just to tell, a story." —The Houston Chronicle