Sucker for a Siren (Paperback) 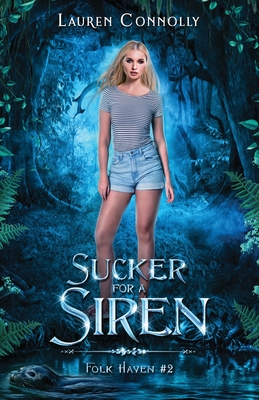 He doesn't believe in fate. She's fine with single life. The gods have other plans.

Seamus MacNamara may be a mythical creature, but that doesn't mean he has to believe all those legends about selkies finding their fated mates. Specifically, that his mate will rescue him. Complete nonsense. If he is going to ask a woman out, he'll do it because he likes her personality, not because she saves his life. Problem is, the barista Seamus has tried his hardest to flirt with ends up giving him the Heimlich when a cookie goes down the wrong pipe.

What would a siren want with a selkie, anyway?

Neri Onassis may have thought Seamus was cute at first, but when he freaks out after her acting the badass hero, her tiny crush evaporates. Good thing, because she needs to put all her brain power toward figuring out her new life in Folk Haven, the mythic-filled town next to Lake Galen. After an awkward break up with both a man and her parents, Neri left her old life behind, determined to figure out what kind of person, and siren, she wants to be. An ungrateful selkie is only a distraction.

But in a small town the two continue to cross paths, and Seamus finds himself giving in to the call of the siren's intelligence and humor. After a passionate encounter, the selkie wonders if the gods had the pairing right all along. But Seamus can't rely on fate when Neri refuses to even consider mating the man who ran from her in the first place.