Swearing at a Sea Monster (Paperback) 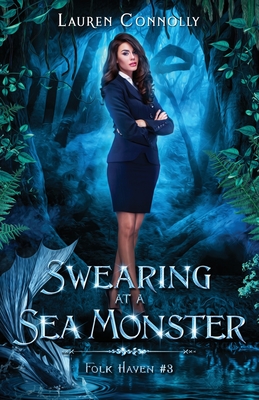 Everyone needs to relax. Even mythical creatures.

Moira MacNamara cannot stand Levi Abadi, and it has nothing to do with the fact that he's a literal monster. Who cares that the man can transform into a terrifying beast? The truly bothersome things are how he ambushes her in council meetings and wants to demolish her prime real estate on Lake Galen. Plus, there's the whole history of his father stealing a precious selkie pelt from her family. Moira will go so far as to enter a dangerous magical competition just to win an argument against the infuriating monster.

The busybody selkie needs to get out of his way.

Levi is barely months from the grand opening of his luxury spa, and he does not need literal duels happening on the vacant property next door. The stubborn selkie owner of the land knows just as well as he does that the ground is steeped in toxic magic, and bad things will continue to happen if no one clears out the evil vibes. Problem is, when Moira comes up with a plan, Levi somehow gets roped in as her assistant. Fine. As long as this means there's nothing bothering his future customers during their relaxation.

On the pair's quest to cleanse the lakeside property, the two mythic enemies find themselves on common ground. Ground they lay down on, roll around on, and maybe lose a few pieces of clothing on. But secrets of the past and new dangers to the town of Folk Haven threaten a fragile romance between the selkie and the sea monster...