The Giant Killer: American hero, mercenary, spy ... The incredible true story of the smallest man to serve in the U.S. Military-Green Be (Paperback) 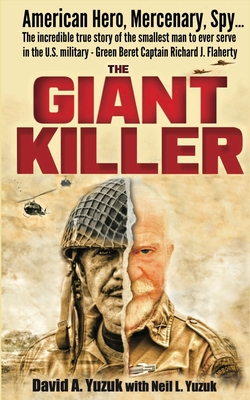 #1 New York Times bestselling author Doug Stanton- "You are holding in your hands an amazing journey into a world of puzzles, intrigue, and mystery. Giant Killers are among us-- author David Yuzuk walked with one and returned with this tale."

If Richard Flaherty was only the shortest man to ever be in the U.S. Army and a Green Beret, that would certainly be a unique story in itself. Flaherty was much more, though. He was a bonafide war hero and beloved leader of the men he commanded. A small stature with a oversized shadow. Yet, he was cut from the Army that was his life after two tours in Vietnam. This story documents as much as can be known about a man whose post army life was spent in a variety of jobs freelancing, alternating between classified missions conducted by the CIA and NSA.... What an interesting man and totally unique story. -John Werner, VINE VOICE

At 4' 9" tall, Richard J. Flaherty needed a Congressional waiver just to enlist in the Army as he did not meet the height or weight requirements. Bullied and ridiculed at boot camp, Flaherty nonetheless achieved the kind of stature that's only dreamed of: He became a 101st Airborne Screaming Eagle and a 3rd Special Forces Group Green Beret Captain earning the Silver Star, 2 Bronze Stars and 2 Purple Hearts. Once in Nam his leadership skills were immediately put to the test during the, "Tet Offensive."

His decommission during the Reduction in Force in 1971 was unexpected and devastating, and Flaherty sank into the murky world of mercenary work. But he gained a reputation for intelligence, and the CIA recruited him to supply the Contras in Central America. So began a wild adventure involving guns, cash, cocaine and HALO jumps into the Everglades. Flaherty continued to work with other agencies including the ATF and discloses a weapons smuggling ring at the heart of Fort Bragg.

Author and police officer David Yuzuk befriended Richard J. Flaherty in 1999, when Flaherty was living homeless on the streets of Aventura, Florida. Flaherty warned Yuzuk that asking too many questions could be bad for Yuzuk's career and dangerous to his own health. Sure enough, eight hours after Yuzuk made a call to confirm Flaherty's identity, Flaherty was killed in a hit-and-run.