Secret Society: All We Have Is Us (Paperback) 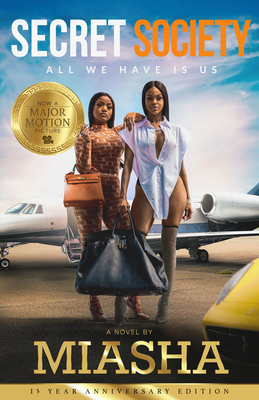 Celess and Tina are at the top of their game. They’ve got the looks and the bodies to attract attention from men wherever they go—and they work it. From New York to Philly to Vegas, they hit all the clubs and every big party dressed to kill. And they don’t pay for a thing—not with men like O, Tariq, and James lining up to buy them designer clothes, the hottest jewelry, and luxury cars.
But their fast paced lives are about to catch up with them. The two share a devastating secret, and when it’s revealed, Celess will need every ounce of her street smarts to survive.

Miasha arrived on the literary scene in 2006 with her debut novel, Secret Society: A Novel to rave reviews and an array of national press including BET, CBS, CN8 and The Wendy Williams Experience. In the years that followed, she released two more Secret Society series books, respectively titled Never Enough and Til Death. Coined "A Writer to Watch" by Publisher's Weekly, Miasha was featured in national magazines like Essence, VIBE, Philadelphia Magazine, Jet and Elle (as the first urban literature author to grace the pages). Her presence was felt even stronger when she released her top-selling sophomore novel, Diary of a Mistress. In 2007, Miasha released her third title, Mommy's Angel, a heartfelt drama that hit close to home. This authenticity landed the book on the best sellers list. Less than a year later, Miasha released Sistah for Sale, a cinematic read about a girl growing up in Miami's sex trade. In addition to releasing seven titles under Simon and Schuster, Miasha contributed to Diamond Playgirls, an anthology published by Kensington Books. Miasha and her family reside in Miami, Florida.