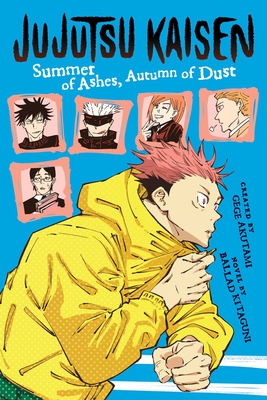 Resurrect the tense conflict between the Jujutsu Sorcerers and the cursed spirits in this collection of original stories.

Sorcery and demon curses abound in this collection of stories spun from the world of Jujutsu Kaisen.

Cursed spirits have struck the opening blow at Satozakura High School in an unfolding conflict against the jujutsu sorcerers. But while this epic and unyielding battle intensifies, the heroes of Jujutsu Kaisen have other mysteries to solve…such as why Yuji and Megumi see Gojo at a maid café, whether Nanami can uncover the secret behind a website that claims to sell dolls that resurrect the dead, and what happens when a blind old man is able to see the scheming Mahito.

Born in 1992 in Iwate Prefecture. In 2014, Akutami began his professional manga career with Kamishiro Sosa (God Age Investigation), but this cat’s claws didn’t make much of a mark.

As a child, Akutami habitually fibbed, filched food, broke things, and blamed the dog. Thus, when Akutami came home after actually getting hit by a car, no one believed him.

At the time of this writing, in 2019, Jujutsu Kaisen was being serialized in Weekly Shonen Jump. There seems to be a general consensus that it’s been drawn in a style people have seen somewhere before.

Born in 19×× in Hokkaido. In 2015, Kitaguni began pushing certain idiosyncrasies on the world with Apricot Red.

One time in the summer, Kitaguni forgot that he had thrust a chocolate bar into a pocket that also contained a smartphone. When Kitaguni pulled out the phone later, it was dripping and gooey, causing an appalled friend to ask, "What did you just give birth to?!"

At the time of this writing, in 2019, Kitaguni was so absorbed in the Jujutsu Kaisen graphic novels he was sent as reference material for this book that he ended up buying all the digital editions too.