The Atmospherians: A Novel (Paperback) 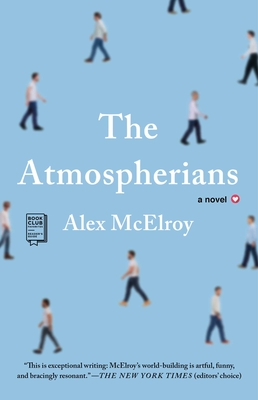 Sasha Marcus was once the epitome of contemporary success: an internet sensation, social media darling, and a creator of a high-profile wellness brand for women. But a confrontation with an abusive troll has taken a horrifying turn, and now she’s at rock bottom: canceled and doxxed online, isolated in her apartment while men’s rights protestors rage outside.

Sasha confides in her oldest childhood friend, Dyson—a failed actor with a history of body issues—who hatches a plan for her to restore her reputation by becoming the face of his new business venture, The Atmosphere: a rehabilitation community for men. Based in an abandoned summer camp and billed as a workshop for job training, it is actually a rigorous program designed to rid men of their toxic masculinity. Sasha has little choice but to accept. But what horrors await her as the resident female leader of a crew of washed up, desperate men? And what exactly does Dyson want?

Explosive, dazzling, and wickedly funny, The Atmospherians is “a book written with this exact cultural moment in mind” (Oprah Daily).

Alex McElroy (they/them) is a nonbinary author based in Brooklyn. Their writing has appeared in The Cut, Esquire, The Guardian, GQ, Harper’s Bazaar, The Atlantic, and elsewhere. Alex has been named one of the Strand’s 30 Writers to Watch and has received fellowships from the Bread Loaf Writers’ Conference, the Tin House Summer Workshop, the Sewanee Writers Conference, and the National Parks Service.

“The Atmospherians is a marvel, a wonder, a gift. McElroy's characters glide across the page, in and out of love, and we see ourselves in their conflicts, their crucibles, and what they hold dear. Simply put, McElroy dazzles. This novel is dazzling.” —BRYAN WASHINGTON, author of Lot and Memorial

“The novel balances perfectly on the razor’s edge between reality and absurdism, the place where excellent satire dwells, while spinning a complex investigation of huge topics: guilt, culpability, loyalty, sexism, fatphobia, abuse of power…. It is a book about craving—fame, food, praise, each other, ourselves—and it is a book to be devoured.” —Vanity Fair

“Gutsy, hilarious, and fully saturated with the absurd spirit of our times, The Atmospherians is a novel about the tangle of capitalism, narcissism, and masculinity that have defined our cultural moment. McElroy is a master excavator of the murky innards that drive us, a satirist with an eye for the tender parts that make us tick.” —ALEXANDRA KLEEMAN, author of You Too Can Have a Body Like Mine

"The Atmospherians is a thrilling satire about wrecked reputations and flawed stabs at redemption, but it's also earnest examination of the fragile place between community and mob; most disturbingly, Alex McElroy draws an accurate portrait of this agitated era." —CATHERINE LACEY, author of Pew, The Answers, and Nobody is Ever Missing

"Rarefied, unstable, charged. This is the constant atmosphere in Alex McElroy’s brilliantly bizarre novel. A sophisticated farce about alienation, The Atmospherians takes our absurd age seriously—which is to say it laughs, darkly, in its face." —HERNAN DIAZ, author of In the Distance, a Finalist for Pulitzer Prize

"This is exceptional writing: McElroy's world-building is artful, funny and bracingly resonant....The Atmospherians includes all of us in its vast, cutting scope." —The New York Times Book Review

"It's a virtuosic send-up of a society run ragged by disingenuous influencers, toxic masculinity, commodified self-care, weaponized positivity, and performative "wokeness” — and the alienation that comes from desperately trying to fit in." —BuzzFeed

“Alex McElroy’s debut novel is wickedly funny, graceful in prose, and brilliant in execution. With its exploration and critique of contemporary culture in general, and masculinity gender performance specifically, The Atmospherians is a Fight Club for the Millennial Generation. I feel particularly bullish on this novel, and this writer.” —MAT JOHNSON, author of Pym and Loving Day

“What wicked, utterly sublime, laugh-out-loud satire. With deft, shimmering prose, boundless in its capacity for capturing our most visceral desires, McElroy deciphers our age of wokeness and all its seductive kinks. This dazzling novel is the world, and we are living inside it.” - NOVUYO ROSA TSHUMA, author of House of Stone

"Alex McElroy has written the novel of our age. The Atmospherians combines Mary Gaitskill's unflinching examination of beauty, cruelty, and power with a toxic masculinity rehabilitation center so outlandishly funny that it would fit perfectly in an episode of Nathan for You. This is a voice to get very excited about: darkly perceptive, stylistically bold, and terrifically, inimitably entertaining." —MARY SOUTH, author of You Will Never Be Forgotten

"An astonishing vision. Every page contains a new wonder, another breathtaking surprise. This novel satisfies a hunger you might have never even realized was there." —MATTHEW BAKER, author of Why Visit America and Hybrid Creatures

"McElroy’s debut is as uncomfortable as it is thought-provoking. It takes on toxic masculinity, eating disorders, influencer culture, and the violence inherent in power dynamics without dragging or overreaching. Edgy, addictive, gruesome, and smart." —Kirkus (Starred review)

"McElroy exposes the cognitive dissonance required to live in a world in which everything exists alongside everything else all at once, the world of the internet. It is a brilliant debut, marking McElroy as a writer to watch.” —The Seattle Times

"Dealing with cancel culture and mob mentalities, The Atmospherians is a book written with this exact cultural moment in mind." —Oprah Daily

"A book about craving—fame, food, praise, each other, ourselves…a book to be devoured.” —Vanity Fair