Caviar Dreams, Tuna Fish Budget: How to Survive in Business and Life (Paperback) 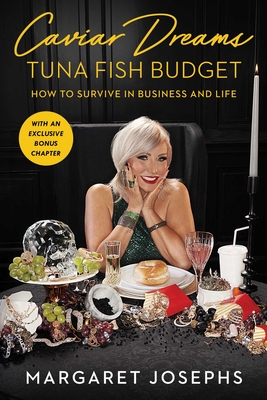 Margaret Josephs is a hustler. She’s a tough cookie. She speaks her mind. She never leaves the house without lipstick on. She’s also a devoted wife, mother, daughter, businesswoman, lifestyle expert, and fan-favorite star of the reality TV series The Real Housewives of New Jersey. Sounds pretty glamorous, right? Well, things are never exactly as they seem.

Before she arrived where she is today, “The Marge” was born to young immigrant parents. Raised by a single party-girl mother who left her physically abusive father when she was one and a half, she was taught that it was more important to look good than to feel good. No structure. No rules. No blueprint for future success or stability. But like most people who struggle through atypical childhoods, destructive relationships, and career challenges, she forced herself to wake up every morning and put one high heel in front of the other, even if she didn’t know where she was going.

Margaret took the cards she was dealt and eventually turned them into a winning hand, and she wants to arm fans with the ability to do the same. In Caviar Dreams, Tuna Fish Budget, she’ll talk about how to launch a lifestyle brand, how to work with family members, and how to be an uncompromising woman in a man’s world. She also spills stories from her personal life about the son Real Housewives viewers don’t know exists, the time Joan Rivers gave her the best advice she ever got, the rendezvous she had with a famous rock star, and the affair with her contractor that ended her marriage but gave her the happily ever after.