The Citadel of Forgotten Myths (Elric Saga, The) (Hardcover) 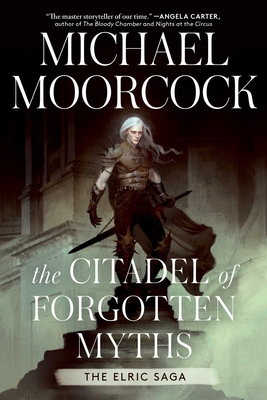 Elric along with his companion Moonglum return, in this prequel set within the early days of Elric’s wanderings, in order to investigate the history of Melniboné and its dragons, known as the Phroon, in this exciting new addition to the Elric Saga from World Fantasy Lifetime Achievement Award winner Michael Moorcock.

Elric is the estranged emperor of the Melnibonéan empire, struggling with his nature while desperately striving to move forward with his dying empire alongside the constant thirst of his soul-sucking sword, Stormbringer. Elric is on the hunt for the great Citadel of Forgotten Myths while traveling through the remnants of his empire with his tragic best friend Moonglum, as Elric seeks the answers to the nature of the phroon of The Young Kingdoms. Taking place between the first and second book in the Elric Saga, The Citadel of Forgotten Myths is perfect for longtime fans and those new to this epic fantasy series.

Michael Moorcock is one of the most important and influential figures in speculative fiction and fantasy literature. Listed recently by The Times (London) as among the fifty greatest British writers since 1945, he is the author of 100 books and more than 150 shorter stories in practically every genre. He has been the recipient of several lifetime achievement awards, including the Prix Utopiales, the SFWA Grand Master, the Stoker, and the World Fantasy, and has been inducted into the Science Fiction Hall of Fame. He has been awarded the Nebula Award, the World Fantasy Award, the John W. Campbell Award, the British Fantasy Award, the Guardian Fiction Prize, and has been shortlisted for the Whitbread Award. He has been compared to Balzac, Dickens, Dumas, Ian Fleming, Joyce, and Robert E. Howard, to name a few.