A Duke Changes Everything Lib/E: The Duke's Den (Compact Disc) 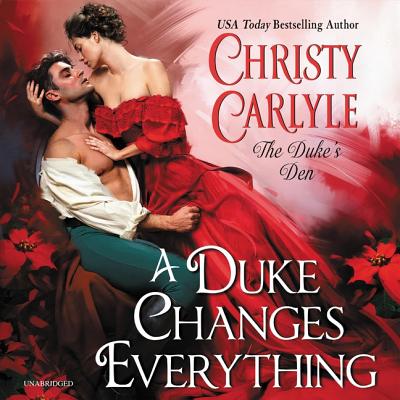 By Christy Carlyle, Karen Cass (Read by)
$59.99
Backordered or Out of Print

Nicholas Lyon gambled his way into a fortune and ownership of the most opulent, notorious gentlemen's club in England. But when Nick's cruel brother dies, he inherits a title he never wanted. The sooner Nick is rid of the estate that has always haunted him, the sooner he can return to the life he's built in London. But there's one obstacle--the exquisite Thomasina Thorne.

When the new heir to the Tremayne dukedom suddenly appears in Mina Thorne's life, she's flustered. Not only is he breathtakingly handsome, but he's also determined to take away her home and position as steward of the Enderley estate. If Mina learns what makes the enigmatic duke tick, perhaps she can change his mind--as long as she doesn't get too close to him.

With each day Nick spends with Mina, his resolve weakens as their colliding wills lead to explosive desire. Could she be the one woman who can help him finally bury the ghosts of his past?