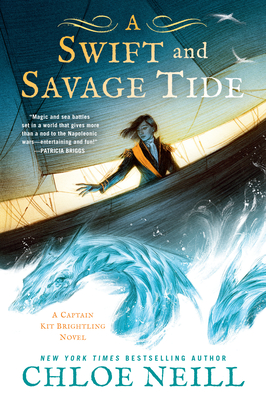 This is book number 2 in the A Captain Kit Brightling Novel series.

Captain Kit Brightling is Aligned to the magic of the sea, which makes her an invaluable asset to the Saxon Isles and its monarch, Queen Charlotte. The Isles and its allies will need every advantage they can get: Gerard Rousseau, the former Gallic emperor and scourge of the Continent, has escaped his island prison to renew his quest for control of the Continent.

Gerard has no qualms about using dangerous magic to support his ambitions, so Kit and the crew of her ship, the Diana, are the natural choice to find him—and help stop him. But then Kit’s path unexpectedly crosses with that of the dashing and handsome Rian Grant, Viscount Queenscliffe, who’s working undercover on the Continent in his own efforts to stop Gerard. And he’s not the only person Kit is surprised to see. An old enemy has arisen, and the power he’ll wield on Gerard’s behalf is beautiful and terrible. Sparks will fly and sails will flutter as Kit and crew are cast into the seas of adventure to fight for queen and country.

“Readers will be sold on the loyal relationships, the snarky dialogue, and the adventurous ocean battle scenes.”-Booklist

"Adventure, romance, and the return of Neill's strong heroine make for an engrossing installment. This will delight series fans and new readers alike."–Publishers Weekly

“A Swift and Savage Tide is perhaps even better than A Bright and Breaking Sea, but it cannot be fully enjoyed without having read that first book in the series. New readers should be informed, therefore, that the two books are best enjoyed when read back to back, all while drinking a cup of heavily sugared tea alongside a pile of Kit's favorite pistachio nougats. The lack of sleep (and cavities) are well worth the effort for such engrossing reads.”--BookPage

Praise for The Bright and Breaking Sea:

“Magic and sea battles set in a world that gives more than a nod to the Napoleonic wars—entertaining and fun!”—Patricia Briggs, #1 New York Times bestselling author of Smoke Bitten

“A heroine worth cheering for and some magic I wish I could tap into myself. Set sail with Captain Kit Brightling; you'll like the cut of this story's jib.” —Kevin Hearne, New York Times bestselling author of Ink & Sigil

“Neill’s creative reinterpretation of the Napoleonic Wars is diverse and gripping, and the growing bond between the well-matched Kit and Grant is sure to conquer readers’ hearts.”—Publishers Weekly