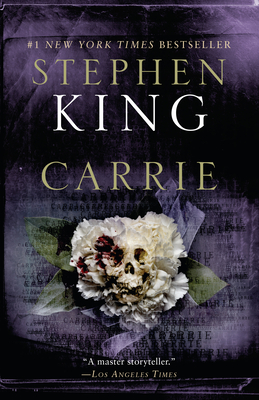 Stephen King's legendary debut, the bestselling smash hit that put him on the map as one of America's favorite writers

Unpopular at school and subjected to her mother's religious fanaticism at home, Carrie White does not have it easy. But while she may be picked on by her classmates, she has a gift she's kept secret since she was a little girl: she can move things with her mind. Doors lock. Candles fall. Her ability has been both a power and a problem. And when she finds herself the recipient of a sudden act of kindness, Carrie feels like she's finally been given a chance to be normal. She hopes that the nightmare of her classmates' vicious taunts is over . . . but an unexpected and cruel prank turns her gift into a weapon of horror so destructive that the town may never recover.

STEPHEN KING is the author of more than sixty books, all of them worldwide bestsellers. His recent work includes If It Bleeds, The Institute, Elevation, The Outsider, Sleeping Beauties (cowritten with his son Owen King), and the Bill Hodges trilogy: End of Watch, Finders Keepers, and Mr. Mercedes (an Edgar Award winner for Best Novel and an AT&T Audience Network original television series). His novel 11/22/63 was named a top ten book of 2011 by The New York Times Book Review and won the Los Angeles Times Book Prize for Mystery/Thriller. His epic works The Dark Tower, It, Pet Sematary, and Doctor Sleep are the basis for major motion pictures, with It now the highest grossing horror film of all time. He is the recipient of the 2018 PEN America Literary Service Award, the 2014 National Medal of Arts, and the 2003 National Book Foundation Medal for Distinguished Contribution to American Letters. He lives in Bangor, Maine, with his wife, novelist Tabitha King.

“Guaranteed to chill you.” —The New York Times

“Gory and horrifying.... You can't put it down.” —Chicago Tribune