The Cover Wife: A novel (Paperback) 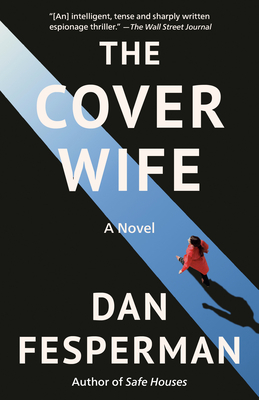 From the award-winning author of Safe Houses—an "intelligent, tense and sharply written espionage thriller” (Wall Street Journal) about a CIA agent and a young expat who find themselves caught up in a dangerous world, whose secrets, if revealed, could have disastrous repercussions for them both.

When CIA agent Claire Saylor is told that she’ll be going undercover in Hamburg to pose as the wife of an academic who has published a controversial interpretation of the Quran’s promise to martyrs, she assumes the job is a punishment for past unorthodox behavior. But when she discovers her team leader is Paul Bridger, another Agency maverick, she realizes there may be more to this mission than meets the eye—and not just for professional reasons.

Meanwhile, across town in Hamburg, Mahmoud, a recent Moroccan émigré, begins to fall under the sway of a group of radicals at his local mosque. The deeper he’s drawn into the group, the greater the danger he faces, and he is soon torn between his obligations to them and his feelings toward a beautiful Westernized Muslim woman.

As Claire learns the truth about her mission, and Mahmoud grows closer to the radicals, the danger between them builds and spells disaster far beyond the CIA.

DAN FESPERMAN's travels as a journalist and novelist have taken him to thirty countries and three war zones. Lie in the Dark won the Crime Writers' Association of Britain's John Creasey New Blood Dagger award for best first crime novel, The Small Boat of Great Sorrows won their Ian Fleming Steel Dagger award for best thriller, and The Prisoner of Guantánamo won the Hammett Prize from the International Association of Crime Writers. He lives in Baltimore.

"A sharp, smart novel that hits fast and hard, its reverberations echoing after the last page is turned. . . . Gripping. . . . As violence erupts and the truth unravels, we find ourselves in a thriller, one that is all the more chilling for running right into fact, and then diving straight into the darkest days of our own recent past. And here the author uncovers a deeper truth, about human limitations and the consequences of systemic failure. In the end, The Cover Wife lands like a punch in the heart, or an arrow finding its mark." —David Gordon, New York Times Book Review

“[Fesperman] specializes in humanizing the internecine turf battles between and within competing intelligence agencies. With The Cover Wife, he has produced another intelligent, tense and sharply written espionage thriller.” —Tom Nolan, Wall Street Journal

“Both gripping and scarily plausible; from the first page to its chilling conclusion, The Cover Wife is a book that demands to be read.” —Kevin Wignall, author of A Death in Sweden

"Fesperman uses . . . excruciating dramatic irony superbly, showing once more, as le Carré did, that spies are often their own worst enemies." —Booklist

"The Cover Wife smoothly incorporates a gripping plot with insightful character studies as Fesperman illustrates the thrill, frustration and challenges of those whose undercover personalities often overwhelm their humanity and their reality." —Oline Cogdill, Shelf Awareness

"This is the thinking-man’s espionage book and the type of story you will have a difficult time not finishing in one sitting. Fesperman’s writing style does not overload you with data and acronyms, but makes you feel like you are there with the characters and experiencing each plot twist along with them. This brilliant read is not to be missed.” —BookReporter

“An absorbing tale of terrorism with a tantalizing what-if at its core.” —Kirkus Reviews