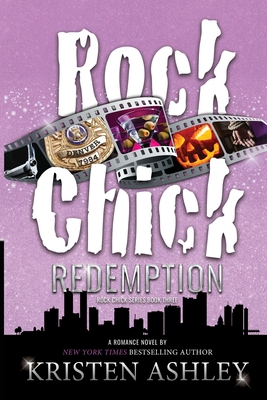 This is book number 3 in the Rock Chick series.

Roxie Logan is on the run from a bad boyfriend who just will not catch a hint that it is o-v-e-r. She's not in the mood for love at first sight. Unfortunately, her eyes fall on Hank Nightingale, and she knows it's trouble from the get-go. Roxie tries to hold Hank at arm's length, but Hank wants to be a lot closer (as in, a lot a lot). Roxie's trouble catches up with her and Hank wants to help, but Roxie knows in her heart that she's no good for a White Hat type of guy. The problem is, no one agrees with her, especially her crazy, hippie best friend, Annette, or her parents, the even crazier, small-town Herb and Trish, or her even crazier Uncle Tex, or any of her newfound posse of Rock Chicks. Roxie's got the odds stacked against her and has no choice but to hold on and ride it out through kidnappings, car chases, society parties and a wild night at the Haunted House. And what she's holding on to through it all is Hank.