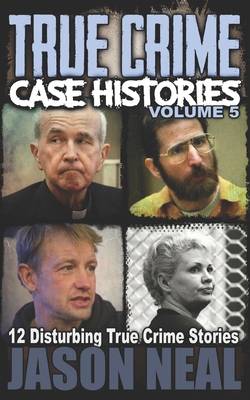 12 True Crime Stories of Murder & Mayhem
Fifth Book of the True Crime Case Histories Series (2020) Those of you familiar with my previous books in the True Crime Case Histories series know that I always start off with a quick word of warning: real true crime isn't for everyone. Television shows and newspaper articles often gloss over the shocking details because it may be too grisly for the average viewer or reader. When researching these stories, I commonly use actual police reports, court documents, and first-hand descriptions. Some of the details can be disconcerting. I do my best to not leave out any of the details in my books, no matter how depraved they may be. My intent is not to shock, but to show precisely how twisted the mind of a killer can be. That being said, if you are overly squeamish, this may not be the book for you. If you're okay with it, then let's proceed. Volume 5 features: longer stories, more photos, a bonus chapter, and an online appendix with additional photos, videos, and documents. Volume Five features twelve of the most incomprehensible stories of the last fifty years. A sampling of the stories include: In this book, you'll read about a young, intelligent man that would rather kill his entire family with a crossbow than tell his girlfriend that he had been lying to her. You'll also read of the suburban housewife that endured thirty years of an abusive relationship before smashing her husband's skull with a hammer. There's the story of the Amish man, tormented by the threat of Hell, that killed his wife because he thought she was the devil. There's also the Roman Catholic priest that ritualistically butchered a nun, stabbed an upside-down cross into her chest, and anointed her with her own blood. Three stories in this volume take place in Washington State, one of which is of a young girl that ran away from her Seattle home in the 1970s. For thirty years, her parents believed she was a victim of Ted Bundy, until the real killer was finally caught. In another, a sexual sadist fancied himself a werewolf while he stalked and butchered his prey in unspeakable ways. Plus many more disturbing stories. The stories in this volume are revolting and disconcerting, but they're true. These things really happen in the world. Though we will never fully understand the criminal mind, at least we can be better informed. Scroll up to get your copy True Crime Case Histories Volume 6 is due out December 2020 and will feature 12 more short stories of; True Crime, Murder & Mayhem, Serial Killer Biographies, and True Murder Case Files.